Wow, where to begin? After three weeks on the road, this is my first much belated update. There’s already been a cross country drive and two weeks of biking through some of the most scenic places on Earth. In fact, as I write this, I’m sitting under a tree in Zion National Park, another place so blessed with beauty that I lament not only my own skills as a photographer, but the absolute limits of the art, which could never do anything but give a pale imitation of natures capacity for splendor.

I captured this just outside of Yellowstone. To think this was an area they decided wasn’t worth protecting…

So rather than do gross injustice to the places I’ve already visited, I’ll save the more in depth coverage of what I’ve seen for future posts and merely sketch out the course already taken. We set out from New York City roughly three-and-a-half weeks ago. Over the course of the next week we drove across the country in a rental

If I were a cow this is where I’d want to live.

car with our bikes in tow. On the way we stopped to pick up our third traveler in Chicago, covered thousands of miles and visited numerous places including Yellowstone and the Badlands.

After arriving in San Francisco, we barely paused before setting out on our bikes the next morning. It wasn’t long before we found our limits being tested by the Sierra Nevada Mountains as we headed into Yosemite. After the indescribable wonders of that majestic valley, we spent days biking through the series of valleys along route. Our next challenge – Death Valley – tested us with the world’s hottest climate. Then, with the worst behind us, we took a break in Las Vegas. Now we have begun our tour through the densest concentration of national parks in country: the canyons of southern Utah.

It was all uphill from here.

If that paltry description our our trip so far leaves you wanting more, good. There will be more detailed posts with the best photos I’ve captured to follow. But for now my lack of computer, as well as my lack of time, limit me to only giving the smallest taste of my experience thus far. A friend from France will be arriving in Denver shortly and between us still lie the largest mountains the country has to offer. 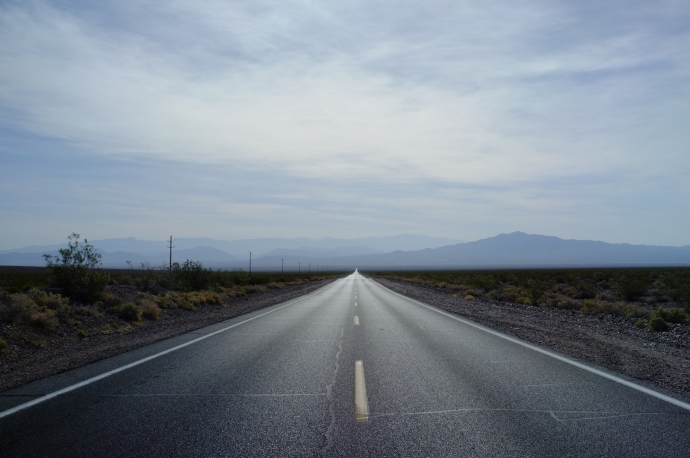 I think I may be on to something with these roads…

One thought on “On the Road”