The Wild Life of Kiruna

Kiruna, the very small city that was my base in Sweden, is an unusual place.  It was founded a little over a hundred years ago, when the local Suomi people helped out the new settlers by pointing them in the direction of iron ore.  It turns out the locals really new there business and the proof is that today Kiruna hosts the world’s largest iron mine, which is in the process of forcing the city to move (due to digging under the city) and also employs the better part of the local population. 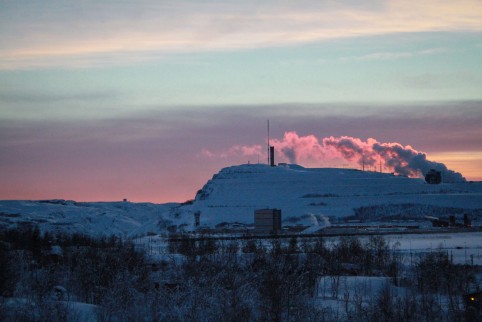 Not a bad looking mine…

It seems that job stability has lingered here longer than in much of the modern world, because in addition to the descendants of those early miners, the Suomi people are still in the area herding reindeer.  In fact, traditionally the Suomi lived of a diet consisting exclusively of reindeer and some still do.  While I also had the opportunity to taste reindeer – like very lean beef and a bit like moose – I must confess I prefer them alive.  Fortunately I had the opportunity for seeing them that way as well at a local Suomi reindeer farm. 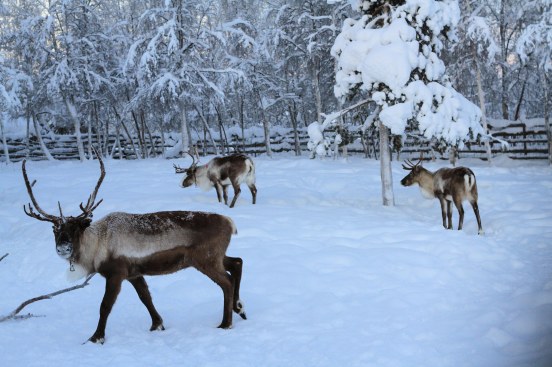 It’s not every day you get to pet reindeer.

Reindeer aren’t the only interesting wildlife in the area either.  Despite the harsh climate, a number of exotic animals make this area their home.  Unfortunately I didn’t get to explore wild as much I would have liked, nor did I spot a silver fox or some of the other exotic predators, but I did see several arctic hairs (a.k.a. huge, fluffy, white bunnies) and, while not exactly wildlife, some of the area’s hard-working huskies.

In fact for those interested in transportation alternatives, Kiruna is a pretty 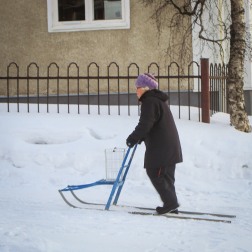 Not all transportation alternatives are adventurous. Behold the kick!

exciting place.  Snowmobiling, skiing, snowshoeing, dog sledding and even reindeer sledding are all pretty common up here.  Still, I can’t imagine a better way of getting around than with a pack of beautiful huskies, feeling the cool (cold) wind in your hair and watching the northern lights burn across the sky.

A lot of people thought I was crazy when I said I was planning a trip to the north of Sweden in January: perpetual darkness, frigid temperatures and extreme isolation.  To be honest there were a lot of challenges up north and I’m not sure it makes my list of places I’d like to live.  Even so I’m reminded once again of how much is to be gained from visiting an out of the way place.  I’ve been to a hundred beaches and would be lucky if I could still remember ten of them, but the dance of the northern lights, a hotel made of ice and the sound of huskies waiting to run free will all stay with me, probably forever.

Two roads diverged in a wood, and I—
I took the one less traveled by,
And that has made all the difference.
– Robert Frost

4 thoughts on “The Wild Life of Kiruna”