It’s not often you find yourself in a snowstorm in July, especially in Italy.  Hard to believe that just over a hundred miles (180 km) from here the local Milanese residents are being slowly roasted by the Italian sun like a sun-dried tomatoes.  My location as you might have guess is somewhere high in the Alps, perhaps only a 15 minute walk from the unmarked French border.  What am I doing here?  Well I ask myself the same thing daily, but the simple answer seems to be that I’m developing a masochistic tendency to seek out-of-the-way places that required a week of hard trekking to reach.

My first Christmas in July

This particular trek is known as the Tour du Mt. Blanc, often included in lists of the world’s greatest hikes and it isn’t completely my fault I’m out here.  A close

friend, perhaps fooled by my clever writing, though he’d enjoy a couple weeks of mountain adventure and this was the solution.  It has lived up to the hype too, although the reality of suffering is quite different from the experience of reading about it.  Still it’d be foolish to focus only on the blisters and ignore the finer points.  The trek passes through three countries – Italy, Switzerland and France – and has views spectacular enough to rival with Nepal.  The terrain is varied and every field seems to be covered in wild flowers as if the spirit of Van Gogh somehow hovered over the whole area.

In fact this trek deserves every bit as much attention as my trek up to Everest Base Camp, if for no other reason than people with a more normal life could easily enjoy it.  Still, given the somewhat intimidating length of my write up on Everest, I figured my busier readers deserved a post they could read without having to take a day off from work. The only problem then becomes what details do I include?

You can still travel back in time some places in Europe.

down a mountain I might focus on some part of the walk, but in all honesty that part has almost become a habit at this point (I should also note that less self-abusive hikers can break up the trip into smaller pieces or higher a service to move their bags from place to place).  No, for me the most memorable part of the trip hasn’t been the significant challenge of climbing over 1,000 meters a day or covering 25km, but rather the most notable aspect has been the stark contrast with Nepal’s extremely Spartan living conditions.

True I’m writing this post by candlelight sitting on a wooden bench in a remote mountain lodge, but the extensive three course dinner and fine beer and wine served here are a far cry from the potatoes or rice duality of the Nepalese menu.  Actually the food up here is downright spectacular, with sliced meats and locally made cheeses being 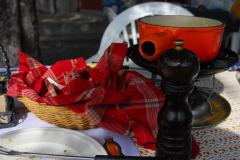 Fondue: it sure beats fried potatoes…

nearly as common as boiled rice was in Nepal.  Food is just the beginning too.  It’s snowing outside, my room remains nicely heated.

Of course luxury like this comes at a price.  One day of sleeping and eating here is easily four times the price of the Nepalese equivalent.  In Nepal I could scrape by on $15 a day and even $10 if I cut back on some expenses.  To do that here requires sleeping outside in my hammock and limiting my diet to bread and cheese, albeit some very good cheese.  Still, it’s hard to argue that being able to take a hot shower more than once every two weeks isn’t worth a little extra cost. 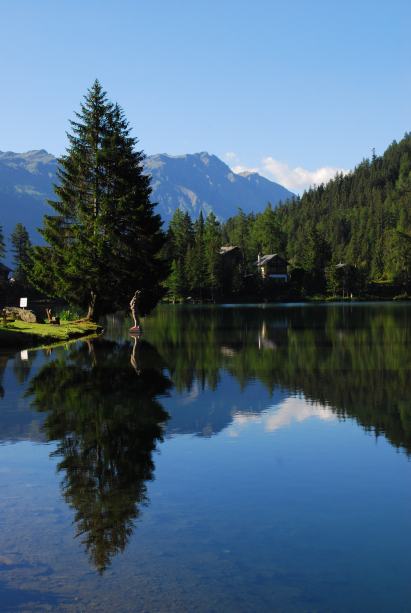 Perhaps I’ll write more about this hike sometime soon, but I’m guessing that like myself you may have all heard enough about mountains for a while.  To remedy that, I’m off to Greece to observe the effects of the current crisis on Greece’s political infrastructure and its role in the Euro zone.  Just kidding, I am heading to Greece, but the only analysis I’ll be doing is of the texture of the various beach sands on my toes.  That should mean some excellent pictures of beaches coming up with white sands replacing white snow of the mountains, so stop by again soon!

I doesn’t get any better than this.