I woke up feeling something less than refreshed, but certainly enthusiastic for the day to come.  I still had a bit of lingering jet lag, aggravated perhaps by the difficulty of sleeping at high elevation, and this resulted in several hours of restless thoughts in the night.  On the other hand my new companions looked like they would make for good company. They were all independent travelers carrying their own packs and I hoped they would keep a slightly less grueling pace than my friends from the day before.

The use of metal makes them one step removed from the bridges in Indiana Jones, but looking down is still an intense experience.

The new group – six people including me – consisted of: a young German engineer with a love of photography, a middle-aged Englishman that loved adventure, a Phillippina doctor about my age traveling for the first time and a young Canadian couple that had been teaching English in Thailand.  This group, which in some variation would make my travel companions for the trip, proved to be perfect travel companions and this perfection was first displayed when they agreed in the most relaxed of manner to start the day’s hike “whenever we woke up”.  Not a fan of early rising this suited me perfectly and I was actually ready to start before much of the rest of the group.

The day was to prove long and hard.  Before starting I had looked at a summary

It’s hard to get the scale of things even when you’re here. This river for instance looks small until you get right next to it.

or the trek and was surprised to see such short daily distances.  A small amount of research revealed this was due to the elevation of the trek: go any farther or higher and altitude sickness would be an issue.  Just how serious this altitude business was began to reveal itself rather quickly.  I had had the slightest of headaches the day before, an extremely common symptom at altitude, but what struck me the most was how difficult the hiking itself became.  I had hiked 20-40km a day across Spain with a pack and that was before my triathlon last fall: this should have been a walk in the park, but it wasn’t.  Hiking uphill with a pack above 3,000 meters was like running a marathon while breathing through a straw.  Even at the most moderate of paces of was constantly out of breath.

Yet despite the challenge the day was a pleasant one.  The weather was stunning, warm enough to need only a very light jacket during the day, and the views did not disappoint.  Our stopping point for the day was Namche Bazaar, the largest town in Sherpadom (I made that word up) and Las Vegas of the Everest Trek, containing a dozen or so guest houses, numerous shops, internet cafes and even two bars that had somehow managed to drag pool tables to a town that lacked any form of transportation not involving feet. Built right on the slope of a mountain their were excellent views to choose from and we climbed as high as fatigue would let us before settling on a modest guest house.

snacks on the way had caught me off guard as the first day had had plenty of shops.  As a result I arrived almost ready to resort to cannibalism and  desperately purchased some Pringles as soon as the first shop came into sight.  Seeing the enthusiasm with which I attacked my Pringles a local farmer, who was enjoying his own more substantial lunch of roasted potatoes, reached out to me and offered me a potato. He spoke no English and the potatoes were simple in the extreme, roasted just as they were upon being taken from the earth. As I sat there fumbling to peal the dirty skin from the hot potato I offered what little I had in return, some Pringles, which both he and a couple of adorable children who were playing nearby gladly accepted.  It was one of the great highlights of my trip.

That evening was a calm one like so many others.  We sat in the common room of the lodge – the only room heated in any of the places we stayed – and enjoyed a simple dinner.  Perhaps the only thing slightly out of the ordinary was the TV.  It spent the evening tuned to professional wrestling, a great love of our host, and from what I could gather his English tutor as well.  It couldn’t have been much past 8 when we went to bed, and it wasn’t a moment too soon as the German and I had planned a special acclimatization hike for the morning (acclimatization hikes are important in preventing altitude sickness as are scheduled “acclimatization days”).  Our wrestling-loving host had said the sunrise from the Everest View Hotel and hour up the mountain was particularly spectacular so we planned to set out at 5:30 in order to catch the show. 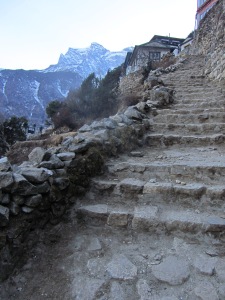 The only this I saw more than mountains was stairs. Unfortunately they’re not quite so picturesque.

The first part of the plan went smoothly.  After a somewhat cold night’s sleep we woke up bright and early and set out for our first Himalayan sunrise.  Our host had procured us some local yak cheese to make up for the breakfast we would miss and we found the path leading to the hotel easily enough in the predawn light.  Unfortunately things began to unravel at that point.  As would become increasingly clear, the time estimates of locals were calibrated for a fully acclimatized mountain dweller.  The time – to make no mention of the effort – for a foreign weakling like myself was 50%-100% more depending on the terrain and your own level of fitness.  This morning was a particularly egregious estimation as the path climbed a brutal 400 meters in a short distance and the frigid air, completely devoid of moisture, punished our panting lungs.

As we climbed the first red light of the sun began to hit the peaks of the mountains around us.  Still far from our destination the German wisely decided to give up the chase but I, having set out with pencils and paper for drawing, refused to be dissuaded.  It turned out to be even farther than I imagined and the sun had fully risen by the time I arrived at the hotel, but I was treated to several spectacular view along the way.  When I did finally arrive I was the first one there, although the hotel staff was busy preparing for the day to come.  I settled in with a much needed pot of tea and started to draw.

One of the several spectacular views from that morning. Everest can be just seen peaking over the mountain in the distance on the left.

It turned out to be one of the nicest days of my trek.  Many interesting guests came through the hotel and they varied from fellow trekkers to a family from Singapore who had taken a helicopter up just for lunch.  As the day passes the outdoor seating filled up and even the Australians from my first day had turned up again.  I decided to walk back down with them and once again was treated to a very informative conversation with their guide.  When we returned to town he even took me out for tea, another highlight of my trip.  It was the last I would see of him as one of the Australians was suffering from altitude sickness and our schedules would no longer overlap.

The rest of the evening was calm with little more excitement than a trip to the grocery store.  After a nice simple dinner of vegetable fried rice, it was off to bed early again.  The hiking from the day had left me so tired I hardly noticed that my voice had started become hoarse and that I had a slight cough.  All I could think of was the relative warmth of my sleeping bag and the adventures that lay ahead.

What’s not to look forward to?