My good friend Giulia over at Travel Reportage passed on this questionnaire to me.  It took a little work, but I traced it back to the source and I’m actually the 7th person in the chain which is pretty spectacular.  According to the six degrees of separation theory that’s the same length chain I should need to connect to the most remote person on Earth.  Even aside from that fun fact, it’s a great list of questions.  Enjoy!

A view from the Camino de Santiago.

A: Age you went on your first international trip: I know that Canada is a foreign country, but I always noticed a bigger difference driving south to Florida than north to Canada.  I’d say my first real international trip was to Australia with my family when I was about 13.

B: Best (foreign) beer you’ve had and where: The word love is overused, but I love beer.  If beer were to stop existing I would cry like a baby.  That’s what makes this such a hard question.  In the end though, nothing can beat the experience of drinking the Trappist beer Orval served to me by the same monks who brew it, a remarkable experience.

C: Cuisine (favorite): I know it’s not an original answer. Still, any answer but Italian would be a bold-faced lie.  I eat pasta or pizza at least four times a week and my favorite high-end meal was at a restaurant in Florence.  Florentine beef comes from a special breed of cattle called the Chianina.  At this particular restaurant they would bring out huge cuts of steak and you would choose the one that suited you.  This is the stuff dreams are made of…

D: Destinations, favorite, least favorite and why: This is probably the hardest question here.  If forced to pick one place, I’d probably say Florence.  I’ve been several times and no matter the circumstances: alone or with others, with or without money, I’ve always had an amazing time.  As for my least favorite, I’d have to say Point Pleasant, NJ.  It was right out of an episode of the Jersey Shore.

E: Event you experienced abroad that made you say “wow”: The Rendentore Festival commemorates Venice’s survival of the plague and continues to be celebrated today with the city’s most spectacular firework display.  My friends’ exceedingly generous father rented a Gondola for the event and we were rowed out onto the Grand Canal for the ultimate front row seats, with lights burning in the sky and reflecting off the water.  I’ll never forget it.

F: Favorite mode of transportation: Bicycle.  People may protest this isn’t a real method of transportation, but I covered 3,000 kilometers (2,000 miles) just last summer and loved (almost) every minute of it.  Not only did I get to see more out of the way places, I also arrived feeling healthy and good about myself, all that and almost no cost.  I also love trains. 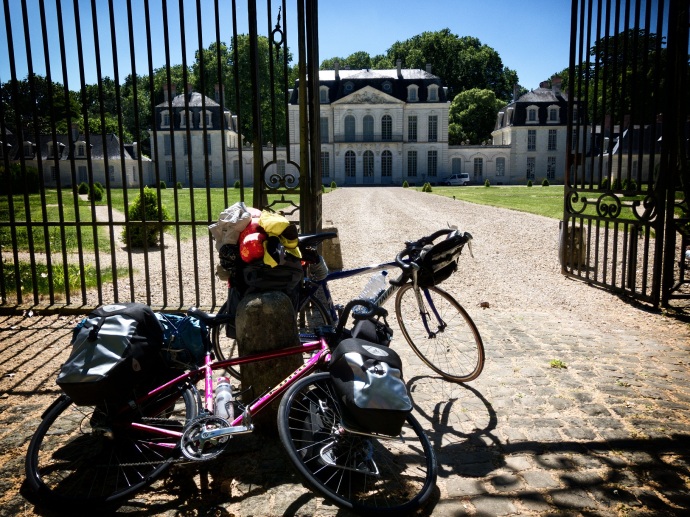 One of the best things about a bike is how easy it is to park.

G: Greatest feeling while traveling: The freedom.  On my first trip to Europe I took a train from Madrid to Vienna. I made some friends within an hour of getting on the train and decided to get off with them in Barcelona.  One of the friends I made on the trip is still my friend today after all these years.

H: Hottest place you’ve traveled to: Death Valley, California.  I had the dubious pleasure of driving through with my sister when it was a scorching 49.5 C (121 F).  We had to stop periodically to prevent the car from overheating and couldn’t use the air conditioner.  I could have used a sauna to cool off.

I: Incredible service you’ve experienced and where: I’ve never found a place that matches the US or Canada.  In a fine restaurant in New York, I get the feeling the waiter would catch my fork before it hit the floor.  Even in a NY diner there is a friendliness and desire to help you enjoy your meal that you just don’t find elsewhere.

J: Journey that took the longest: A slow as a bike is, traveling by foot is slower.  Walking the Camino de Santiago took about a month, but then again it was the greatest journey I ever had.  My longest non-self-powered journey was a 24 hour flight to Australia.  Unlike the Camino, it wasn’t a very pleasant experience…

One of the countless beautiful scenes I found along the Camino

K: Keepsake from your travels: I try to buy very little and definitely value the gifts I’ve received more than anything, e.g., my necklace, a compass, a camera tripod, some socks.  My most recent acquisitions were a journal and a book I received while staying at Pluscarden Abbey. You wouldn’t even notice most of these items among my things, but they’re priceless to me.

L: Let-down sight, why and where: Another tough question, I’d probably say London.  It’s not that London isn’t an amazing city, but coming from New York I was disappointed at just how similar to New York it was.  Almost like a more expensive New York with worse weather and food.

M: Moment where you fell in love with travel: Before I can remember.  My dad used to drive me around in the car to help me fall asleep as a baby.  Maybe it started then.

N: Nicest hotel you’ve stayed in: I’ve stayed at five star hotels in Alaska and Warsaw.  Both were amazing, perhaps in part because both were very unexpected stays.

O: Obsession—what are you obsessed with taking pictures of while traveling? I know it’s cliché, but sunsets.  I love sunsets and go out of my way to see them wherever I am, especially if there’s water on a western coast.

One on many stunning sunsets I enjoyed in Menorca.

P: Passport stamps, how many and from where? Sadly my passport was stolen recently.  That means I have a new, nearly naked passport, just waiting to be filled.  We’ll see what I can do this year.

Q: Quirkiest attraction you’ve visited and where: I had a hard time coming up with an answer for this one.  I don’t tend to go in search or giant frying pans or things like that.  I once took a long detour to visit Mexican Hat Rock.  It was a rock that looked like…. well a Mexican hat.

R: Recommended sight, event or experience: Walking the Camino de Santiago.  Walking for a month cross-country is so different from the normal travel experience that it’s hard to put into words.  I don’t know anyone who’s completed the trip and not found it a life changing experience.  I couldn’t recommend it enough.

S: Splurge; something you have no problem forking over money for while traveling: I always have a problem forking over money, usually because I don’t have any.  Still, soon as I get money I’m sad to admit that I have a terrible weakness for beer and coffee.  Sounds pitiful I’m sure, but when you’re on a budget of a few dollars a day it’s a problem.

T: Touristy thing you’ve done: I avoid touristy things like the plague, not out of some sort of elitist snobbery, but because I generally don’t enjoy them.  My old firm took me on a tour or the San Diego zoo some years ago.  It was fun actually, but I’d still have preferred exploring on foot.

U: Unforgettable travel memory: Countless at this point!  One that immediately comes to mind was standing for the first time in the Pantheon in Rome.  I studied Classics in college, but to actually stand in a building built by Ancient Roman hands brought everything I’d learned to life.

V: Visas, how many and for where? I hate Visas to the point of breaking the law.  I lived and studied in Switzerland for over a year and never got a Visa.  I just told them I was visiting every time I crossed the border, which was almost daily since I lived right on the French-Swiss border.

W: Wine, best glass of wine while traveling and where? The wine I’ve been served has far surpassed my skill to appreciate it.  I do remember visiting Moet Chandon in Epernay, France and having an amazing tour followed by a champagne tasting.  That will be tough to beat.

X: eXcellent view and from where? I actually have a definitive answer for this one.  The greatest view I ever saw was from Dead Horse Point in Utah.  I’d include a picture, but no picture could begin to capture the actual experience of standing there.  The view is from an isolated state park and looks down into the Canyonlands National Park, literally breathtaking.

Y: Years spent traveling? I’m not sure really.  If you add up all the time I’ve spent traveling it would easily make up several years of my life.  Just this last trip has been 11 months and since I’m now homeless it has no projected end date.

Z: Zealous sports fans and where? Italians love soccer and my first trip to Rome just happened to start exactly when Roma won the national championship.  There were people dancing in fountains and parading through the streets.  It all culminated in a concert for half a million people at the Circus Maximus.  I snuck into the Palatine Hill with some other fans in order to have to have the best possible view. It was the same one Ceasar Augustus would have had when watching chariot races… unreal.

That tiny little speck is me waving an AS Roma flag!

Now the hard part, I’m supposed to pass this on to five other travel bloggers.  Problem is I don’t know five travel bloggers, so in a slight expansion of scope I’m going to pass it on to just five (or six)bloggers.

Janice at After the Artist’s Way

Laura at The Artful Gardener

Tracy at The Heso Project

3 thoughts on “My Travel ABC’s”