Prior to my Ironman, I had never run a marathon.  Actually, I’d never run in a race of any kind, no triathlons, half-marathons, not even a 5k.  Yet as I hopped off my bike, a strange confidence filled me.  I had come this far. I would see this to the end.

In the transition tent I slipped into my running shoes and started stuffing my face with gummy bear.  Unlike my first transition, there were a number of people in the area this time.  That worked out particularly well since I was as unprepared as ever and needed something to prevent chaffing.  The guy next to me had what I needed and I was ready to go.  I asked if he was ready too, but he didn’t feel well.

“I don’t know, my body’s given out on me.” He was clearly in pain, but self-inflicted torture tends to have that effect on one’s body.

“You have six and a half hours.  You can walk if you have to.”

I didn’t have time to argue, so I left him with a few more words of encouragement and went to grab my jacket.  I couldn’t imagine stopping after having come so far. It saddened me to think of anyone not making it, but it must have been more common than I thought, because as I grabbed my jacket one of the workers asked if I was going back out. “Of course I am.   I don’t know how to quit.”

The run was four laps along a very hilly course that passed through town.  While the hills were a challenge, the laps were perfect.  I’d been alone almost the whole day.  Now, I was surrounded by racers and supporters.  Even though my legs felt like soggy spaghetti, I felt strengthened by the support of the people around me.  At first I could only jog for a moment and then walk, but I passed person after person who helped me.  I passed the family I was staying with, who had all come out and waited patiently, hoping I was still in the race.  I passed the bike store owner who remembered my singularly unimpressive bike.  I passed person after person I had met on the street or in a bar, and to my amazement, they all remembered me and cheered me on.  I was even cheered by some of the race workers who remembered me from the mornings swim.

It made all the difference.  I had walked half of the first lap, by the second I was jogging, by the third I could even run.  I had no watch, so I was worried about another close finish.  After a little more than two laps another runner gave me the time.  It was 8:20.  I was shocked.  I’d run more than half the marathon in two and a half hours. It’s not an impressive speed, but it was just as fast as I ran in practice, rested.   It wasn’t going to be close.  I was going to finish. 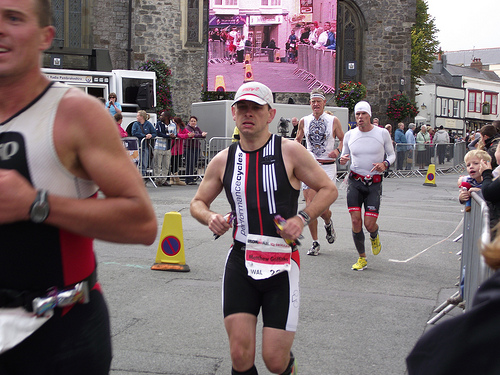 I ran a while longer and the rain started coming down hard.  The winds picked up and the sun had long set.  Most people still on the course had slowed to a jog or a walk.  I was too happy to keep to myself and began talking to a woman who had been at my pace for some time.  She was running each lap dedicated to a member of her family.  I wasn’t the only who’d gotten their strength from others.  We slowed to a walk, knowing the time no longer mattered and enjoyed the anticipation of finishing.

My adopted family was waiting for me at the finish line.  It seemed the perfect end to the perfect day.  I had made it.  I was an Ironman.   If I’d had the strength I might have cried, but as it was I could only smile.  As we talked, someone called out to me.

“Hey! Hey!  Look I finished!”  At first I didn’t know who it was, but then it came to me.  It was the man from the transition tent.  “I wasn’t going to go back out, but I couldn’t stop thinking about what you told me.  I didn’t think I could do it, but I finished because of you.”

“When I cross that finish line, my hope is that people will change their minds about the impossible, that at least one other person will stop believing in it.  That one person will be bold enough to venture out and find what I found: that anyone who pushes through the shadow of learned limitations and impossibility will find the darkness doesn’t end with a towering wall or an insurmountable obstacle, rather they will find a world of great possibility, one full of hope, dreams and opportunity.”

My own goal as stated in Impossibility.